Hypersonic spaceplane engine that could blast tourists into orbit at five times the speed of sound set for Colorado tests.

A revolutionary engine that could be used in a spaceplane to take passengers into space in just 15 minutes has taken a major step forward with a new testing facility in Colorado.

In the UK the is continuing to develop the TF1 engine test facility at Westcott where the first ground-based demonstration of the Sabre rocket engine will take place.

The UK site will incorporate a hydrogen/air-breathing pre-burner to condition the air for core evaluation and is adjacent to a test facility where Reaction’s rocket nozzle tests have also been conducted.

The test centre will feature an assembly building, workshops, offices and a control room, along with various test engine configurations.

The company plans on putting the Sabre engine in a reusable spaceplane called Skylon - a vehicle capable of launching heavy telecommunications satellites.

Mark Thomas, CEO at Reaction Engines, said: 'This is another exciting step forward in development of Reaction Engines' Sabre engine and a visible demonstration of the UK's commitment to the programme.

Last year, the European Space Agency (ESA) invested £8.5 million ($11 million) towards the development of the engine.

Reaction Engines has now has secured over £50 million ($66 million) in funding from the British government, with more than £42 million ($55 million) from the UK Space Agency, and the ESA contribution acting as the final piece.

The revolutionary Sabre engine could allow aircraft to take off from a runway and accelerate to five times the speed of sound, before switching to a rocket mode, propelling it into orbit. 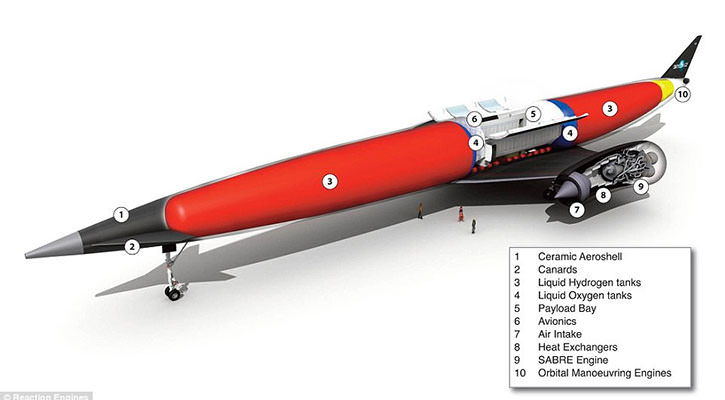 This design could also be used to send satellites into space at a fraction of the current cost.

At the moment, rockets have to carry liquid oxygen and liquid hydrogen to power them and the cost of carrying this heavy fuel is expensive.

The new engine creates its own liquid oxygen by cooling air entering the engine from 1,000°C to minus 150°C in a hundredth of a second – six times faster than the blink of an eye – without creating ice blockages.

This allows the engine to run safely at much higher power than is currently possible, without the risk that it will overheat and break apart.

Mach 5 is about two and half times faster than the top speed achieved by Concorde and could be the next big leap forward in powered flight.

The air passes through these pipes and the helium helps remove any heat and the oxygen is carried to the engine.

Once in space, the engine is capable of switching into rocket mode.

This means the craft can travel in orbit for around 36 hours and be used to launch satellites, for example.

BAE will be developing an aircraft fitted with the new engine.

The team plans to produce a demonstration model by the end of the decade, although designs for passenger aircraft are still at least 20 years away.